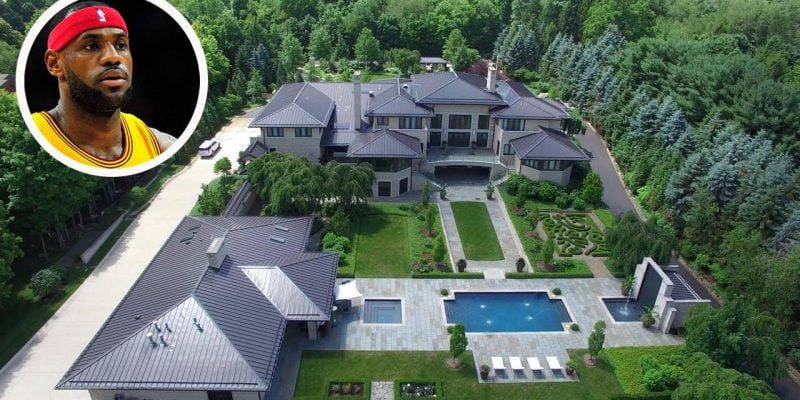 When it comes to luxury houses, NBA stars don’t seem to spare any expenses. Since most of the players in the NBA have multi-million dollar contracts, they can afford to go over the top with their properties. Their house have all the things from gorgeous hillside landscaping to in ground pools. There house can become a great source to take inspiration from designs like inground pool ideas and many more such things.

Even though some of the NBA stars still rent houses just because it is more affordable than actually buying one, we still collected a list of some of the jaw-dropping mansions owned by NBA stars.

After Dwight Howard moved to the Huston Rockets, he listed his old house in Florida and bought an incredible mansion for $7.8 million. The house is built back in 2008 and features four bedrooms, seven bathrooms, and a massive living space of 11,025sq. Ft.

It has a beautiful Gothic design filled with designer furniture and vaulted ceilings. It is truly luxury at its finest.

Nowitzki had a tremendous career, retiring last year after two decades in the Dallas Mavericks. One of the best power forwards ever in NBA, it’s surprising he doesn’t figure in this list of BetAmerica: extra.betamerica.com/nba/the-best-power-forwards-in-nba-history/

Now that the German basketball star is retired he can enjoy is time in his incredible mansion in Dallas.

Unfortunately, there aren’t many photos of Dirk’s massive estate on the internet, but from the information, we have the house absolutely incredible. It is built back in 2003 in wonderful Colonial style, and it is located very close to Mark Cuban’s massive estate.

The house has 9,215sq. Ft. of living space alongside six bathrooms and five bedrooms. Additionally, it has a tennis court and a huge swimming pool.

After Chris’s move to the Clippers, he bought a jaw-dropping residence (from the retired rock star Avril Lavigne) for $8.5 million. This Mediterranean-style home has a massive 12,000 sq. ft. living space, a gym, sauna, wine cellar, and eight bedrooms.

The Heat legend has bought a massive 13,000 sq. ft. mansion in the ultra-exclusive La Gorce Island for $8.9 million. This house also features Mediterranean-style and comes with eight massive bedrooms, and nine and a half bathrooms.

The best thing about this mansion is that it comes with its own guest house, dual kitchen areas, impressive pools, and a tennis court.

James has never been shy when it comes to spending his money and showcasing his luxurious lifestyle. When he played for Miami Heat, he owned a mansion that he sold for $13.4 million and bought a massive 30,000 sq. ft. mansion in the middle of Ohio. Obviously, it has to match his nickname “King James,” which is why he went overboard.

This real estate is valued at $9.2 million and includes eight full bathrooms, six and a half bathrooms, a movie theatre, a basketball court, and six bedrooms.

But that is not all. LeBron James also splashed more than $20 million on an impressive vacation home in LA’s ultra-exclusive Brentwood community.

This dreamy California mansion is actually Chri’s vacation home, and currently, he is trying to sell it for a whopping $14.5 million or renting it for just $45,000 a month. The place is 10,755 sq. ft. and includes six bedrooms, eight bathrooms, and sweeping views of the Topanga Canyon.

A couple of years ago, he bought this impressive mansion that has 9,100 sq. ft. of living space, home theatre, gourmet kitchen, six-bedroom suites, and a spa bath. It also has a home gym, three fireplaces, and a nice pool.

It seems that NBA stars really know how to spend their money. All of these mansions are located in highly exclusive areas and feature designer pieces that launch the value of the property.

Most of the NBA stars decide to buy old properties instead of building one themselves just because of the location. They are truly impressive and a nice way to get some ideas for your home.