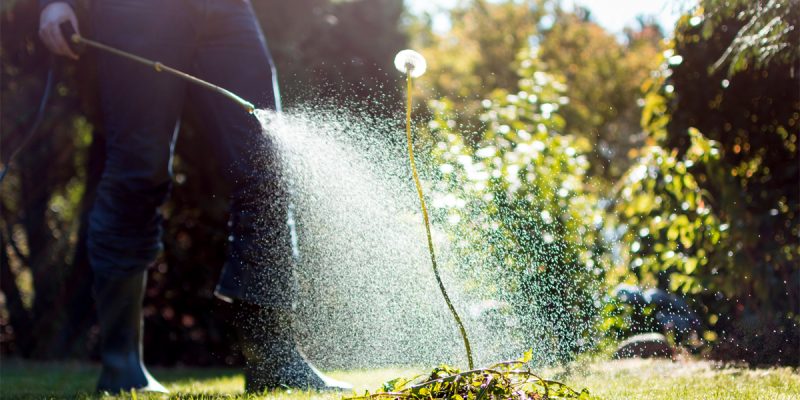 Growing that delicious produce takes time and care, and a lot of this time is spent making sure that the crop makes it to harvest.

Along the journey of our favorite fruits and vegetables, seedlings have to be cared for to combat the armies of insects and weeds that can be potentially harmful and fatal to crops. In doing so, we’ve developed a host of pesticides and herbicides.

Unfortunately, many of our commonly used weed killers are extremely harmful if consumed by humans. Here, we’ll explore why you should consider a few natural alternatives to controlling weeds around your produce.

Certain chemicals such as Glyphosate and Paraquat used in herbicides are so overused and widespread that trace amounts have been found in everything from breast milk to organic wine.

The chemicals have also been found in concentrated amounts in the rivers and streams of over 38 U.S. states, and in over 70 percent of rainfall samples.

These chemicals sink into the groundwater and travel through runoff pathways, ultimately making it to our oceans. In fact, in the Gulf of Mexico, where the mouth of the Mississippi River meets the gulf waters, there is an anoxic dead zone where fish cannot breathe due to the lack of oxygen in the water.

This is due in large part to the amount of chemicals that the watershed delivers to the Gulf of Mexico. Additionally, several people are considering filing class-action lawsuits due to developing cancer from handling chemicals like Paraquat and Glyphosate.

All this considered, the benefits from switching to an environmentally and biologically friendly alternative far outweigh that of the current method.

The plant world is vast, and even the most educated botanists and Earth scientists have yet to unlock the wealth of health benefits that many of these plants naturally produce.

Several plant species are actually known for helping to naturally repel insects. Depending on the crops you’re growing, several of these herbs have characteristics that certain pests dislike, so they’ll naturally avoid them if planted around your crops.

A few plants to consider are as follows:

Most of the herbs and plants in the list above are ideal for protecting against mosquitos, aphids, flies, ticks, and many other bugs as well.

Aside from planting herbs and florals for protection against pests, there are several methods for keeping out invasive plant species that can equally cause harm to your crop or garden.

This is commonly known as vinegar and has a physiological effect upon contact with plant tissue. The acid, when in the proper concentration, will effectively dissolve a plant. When sprayed on invasive weeds, acetic acid is a natural alternative in place of using herbicides.

Salt is a desiccant. This means that it effectively dries out the leaves and stems of a plant.

While sprinkling salt on your plants won’t cause much to happen by itself, making a concentrated saltwater solution to spray over weeds will eventually kill weeds and roots over time.

You should also note that many people prefer to use a combination of salt and vinegar to make this form of natural herbicide more potent.

Soaps have the ability to break down the waxy outer layer that most weeds have along their stems and leaves. This is a protective layer that the weeds cannot live without for very long.

Again, that’s why many people use a combination of vinegar, soap, salt, and water to make a potent natural herbicide to keep invasive weeds away from their crops.

While we all enjoy our fresh fruits and vegetables, we want to enjoy them in a safe and healthy manner.

Though the presence of large-scale commercial pesticides and herbicides will take years to completely break down and runoff into our oceans, we can make small changes now to ensure that we’re not eating toxic chemicals.

Considering the few natural alternatives mentioned here, we have viable methods available now to ensure the safety of our crops, and ourselves.