Put-In-Bay, Ohio is an island in Lake Erie

It’s hard to believe that I’ve lived in Ohio all my life and have never been to Put-in-Bay. I’ve heard about it forever, but I never really had the opportunity to go or big desire. I had this offer to do a review of the island, and was told I could bring my family. I’ve always heard that Put-in-Bay was a “party” island, so I immediately said that I didn’t want the kids to come. But I was curious myself. Dave and I set off for the island on a Saturday morning.
It took us just under three hours to get there from the Columbus area. We met up with Ryan, who owns Green Door Mediaworks at the Miller Boat Line to catch the ferry over to Put-in-Bay. The day seemed a little questionable weather -wise.. but we lucked out. A few threats of rain, but everything bypassed us.
Ryan was an awesome tour guide on our way to the island. He was pointing out all the little islands and explaining where things were, etc. He really knows the island and history.
With Miller’s Ferry you are able to take your car over to the island if you’d like to, but it isn’t nearly as much fun. We went up to the top to sit, where there were plenty of seats to enjoy the ride over. 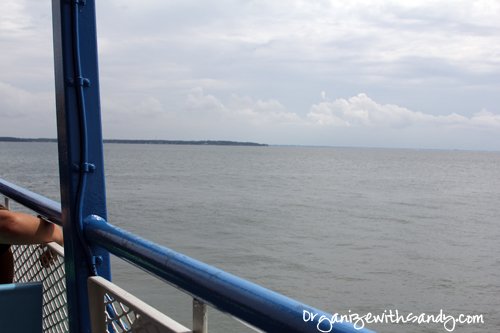 To me… part of the charm and the “feel” of the island was using the golf carts. It was so fun to just tool around in them. Of course, we could have gotten bikes (but thank goodness Ryan planned for us to get the carts and not bikes! I would have been dying with bikes!) instead of golf carts, but you can cover a lot more of the island in an afternoon with a cart.
We all went to lunch at a cute place called Goat Soup & Whisky Tavern. There was a darling outdoor patio, and a few tables with umbrellas that were outside of that. Although I didn’t try and soup or whisky, I really enjoyed it. I did try two new things, walleye fries and a perch taco. The Walleye Fries were just pieces of Walleye that were cut in long narrow strips and deep fried, with some dipping sauce. Yum! I have heard my friends talk about fish taco’s for years, but have never tried one. I decided to go for it. These were fried perch taco’s. Oh… so good! I had one, but wish I had ordered two. I will for sure get these again when I come back to visit the island the next time. 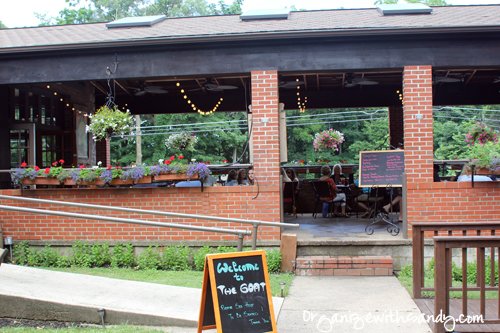 After lunch, Dave and I took off on our own and explored the island. It would have been fun to have been able to have eaten a few more meals on the island. There were several places I would have loved to have tried.
I think The Keys, sitting out on the water looks so fun! I love the way it looks, with the bright beachy colors. One thing I love to do when I go to a beach, or lake, or somewhere with water; is to sit and drink a nice glass of wine. Yes.. next visit for sure.
The Board Walk also has that water view and feel. It looks like a little finer dining. Maybe The Keys for lunch and then the Board Walk for dinner?
I love the outdoor seating at Hooligans Irish Pub, it just looked very comfortable. It’s not over looking the water, but it is right in the center of town where you can see all the activity.
It was pirates weekend when we were there. There were cannon’s going off, a pirates market/craft show in the middle of the square and men,woman,kids and animals all dressed up as pirates.
The square and feel of the island town was charming. I loved it. Everything was clean and well taken care of. I had always envisioned this row of old bars, when I thought of Put-in-Bay. Not that I’d ever been here to see… but my entire thought of the island is different now. There were plenty of places for people to drink, and there were plenty of people eating and drinking in them – but the atmosphere was fresh, clean and very island feeling. You tend to forget you are in Ohio.
There are some sights to see on the island and things to do. We went to visit the Perry’s Cave Family Fun Center and did a few activities there.
We went to visit the Butterfly House. There was a really nice gift shop inside and the actual butterflies are in a greenhouse style structure in the back.
Going into the butterfly house, someone came up to us and gave us some information about the butterfly house. That was really nice. They were there to answer any questions, and to let you know how to be careful with the butterflies, so as not to harm them.
We then went on the Perrys Cave tour. I have to explain that I’ve been in several caves and really enjoy going on cave tours, before I give my honest opinion on this cave tour. This was a 20 minute tour. We walked down a flight of steps to go down into the cave. You have to bend down part of the way, going down the step and small steps to a depth of only about 50 feet below ground. This was a wet cave. Puddles of water to walk around, and water dripping off the ceiling. I know some caves can be wet, and others aren’t. Our guide did a great job of explaining things in the cave. I can not however recommend this cave tour. Maybe if you’ve never been in a cave, you’d find it worth the cost. A good explanation for me would be, too much talk and not enough cave. I felt like they tried to drag out the tour to make it at least 20 minutes. You walk, only about 150 feet into the cave and stop every few feet for a 5 minute talk. I heard a couple people saying, “Is this it?” and one little boy said, “Where is the rest of the cave, where does that go?”. I felt very disappointed. Had Dave and I had to pay the $8 each to go into the cave (rather than it being part of my review), I would have really been disappointed.
There was a really nice putt-putt course. We always love a good game of putt-putt!
Driving around the island and seeing the sites, stopping for some ice cream and just wandering around was so relaxing. I really wish we could have stayed a few days.
I can certainly recommend Put-in-Bay to anyone! If you love a beautiful, active and fun island, then you’ll love it here. I feel like we made a mistake in not bringing the kids with us. I would have no problem bringing them here. I might not plan to have them in town on a weekend night, as I’m sure things liven up quite a bit – hence the party atmosphere. But it’s not something you wouldn’t see in Florida or any other vacation zone that has bars and water. I think they would have loved it here.
I’ll be sure to come back, but I want to plan on spending a little more time here… and of course – I’ll be sure to get a golf cart to get around!
You can follow these handles to find out a bit more about the island.