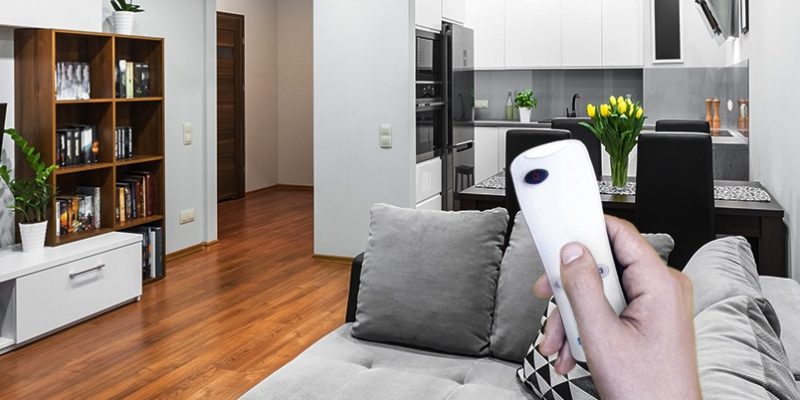 Some ceiling fans have remote controls nowadays and though they cost a bit higher than the regular fan, they are really worth it. Remote controlled ceiling fans offer a lot of benefits to users and this is what this article is going to focus on.

Remote controlled ceiling fans are easily accessible. You can control the fan from a distance and even those who cannot reach the pull chain on the ceiling fan can operate it.

The remote control can help the disabled to control the amount of air they want in the house without any hassles.

You don’t need to be near the fan in order to operate it. Really convenient isn’t it? Remote controlled ceiling fans are the best fans to have at home as they save you the energy of walking up and down to the switch to operate the fan.

If you wish to install a ceiling fan with light fixtures then go for a remote controlled one as it will help you with having to install extra wiring in  your circuit.

Usually, you would have to connect a fourth wire from your fan to the wall switch to be able to control your light fixture like turning it on and off without affecting the ceiling fan.

If you buy a remote controlled ceiling fan you will save yourself from connecting this fourth wire and probably use the remote control to adjust both the fan and the lights.

Most ceiling fans are high up in the ceiling beyond the reach of children but as we all know kids have a way of reaching things we don’t want them to.

You won’t be surprised to see your children standing on top of the table or chair just to play with the ceiling fan pull chain. Instead, get them a trampoline to jump and play.

The only way to avoid such circumstances is to buy a remote controlled ceiling fan and just put the remote out of the reach of the children.

With a remote controlled ceiling fan there won’t be any pull chain to play with and if you make sure that the remote is safely away from where kids could reach then you know that your fan is safe and so are your kids.

4. One remote for multiple fans

In homes with multiple ceiling fans, you would not want to adjust them one by one. If you have more ceiling fans in different rooms you can set up some configurations so that you can control them all at once using one remote control.

This eliminates the need to remember multiple switches, just to turn them on or off or control the speeds.

It also helps in managing your ceiling fans and saves you time and energy on going from one room to another to adjust the fans.

Traditional ceiling fans do not come with this type of luxury. If you pull the chain then the fan starts working and there are no options on adjusting the speed of the fan. Thus, remote controlled ceiling fans are the way to go as they offer such luxurious options where you have to choose what you want.

6. Adds style to your home

Remote controlled ceiling fans are a modern thing which means they come in many modern designs. Not only do they provide a cool breeze into your home but they can also beautify your home as they come in different fancy styles.

Some have gold, nickel, wood or silver finishes that can go well with any interior design and they add a unique feature into your home.

Also having a remote controlled ceiling fan adds value to your home and if you are renting out your premises with such fans, then you can also charge higher rentals.

You don’t need to worry about having to replace your original remote control when they are damaged. In the event that you have different brands of ceiling fans in different rooms then you will be happy to know that there are universal remote controls that work on any fan.

If you have name brand fans, such as Hunter, Hampton Bay, or Westinghouse, you can find a selection of remotes made to go with the models you have.

You can also get one remote that works on all those brands.

This can save you from having to buy different types of remotes for your different brands.

If you are the lazy type, have troubles walking around, or just want to make your life easy then you should just get yourself a remote controlled ceiling fan.

When Bea Johnson and her family moved, they learne

With your bedtime routine, wakeup ritual, and all

Let’s face it: Grout and caulk is not a sexy sub

It's easy to talk the talk when it comes to enviro

Unfinished walls can be an opportunity to get crea

Short on space and funds, but long on design ingen

Furoshiki is a centuries-old tradition in Japan as

If there was ever a time to revisit children’s w

The latest object of our admiration? Particularly

Even in a good-sized kitchen, it can be hard to fi

The editors of The Organized Home, on the whole, l

Even the most avid cleaners can struggle to keep u

Whether you are working from home or back in the o

🚨 Sweepstakes Alert 🚨 Visit the link in our

Laundry detergent strips, it turns out, have been