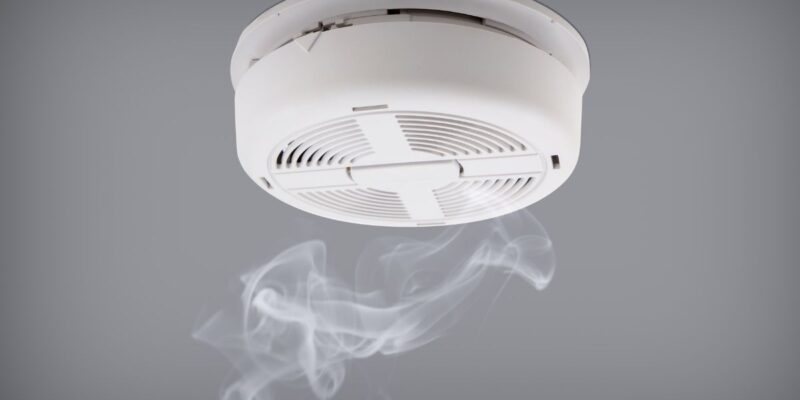 Smoke alarms are a vital component of any home’s fire safety system. They are designed to detect smoke or fire and alert you and your family to evacuate your home as quickly as possible.

Smoke alarms were invented in the early 1960s by a group of researchers at Texas A&M University. The first smoke alarm was called the “Fire Alarm Unit,” and it was designed to detect smoke in the event of a fire.

Today, the Brighton air conditioning experts in Martel Electrical is here to provide you further guidance on smoke alarms.

The first smoke alarms were not widely available to the public until the 1970s when they began to be mass-produced and sold in hardware stores and other retail outlets.

Since then, smoke alarms have become a standard feature in homes and buildings all over the world, and they have been credited with saving countless lives. In this guide, we will discuss the different types of smoke alarms, how to install and maintain them, and other important fire safety tips.

There are two main types of smoke alarms: ionisation and photoelectric. Ionisation smoke alarms use an electric current to activate the alarm and are more sensitive to flaming fires and are faster at detecting fires that start suddenly.

The downside to these types of alarms is that they are more prone to false alarms, such as when cooking or burning candles and can be less sensitive to smouldering fires such as those caused by cigarettes or electrical malfunctions.

Photoelectric smoke alarms use light or visible particles of combustion to trigger an alarm and have a greater sensitivity to smouldering fires. They can be activated in as little as 3-5 minutes and are less prone to false alarms. The downside to these types of alarms is that they can be less sensitive to flaming fires and be slower to detect fires that start suddenly.

Smoke alarms should be installed on every level of your home, in each bedroom and outside of sleeping areas, such as in the hallway or living room. When installing smoke alarms, it is important to follow the manufacturer’s instructions and local building codes.

This is where hiring a local electrician is helpful as they are up to date with the latest safety regulations and will install them properly as opposed to installing them yourself. The latest smoke alarm regulation in Queensland is that all owner-occupiers must install interconnected smoke alarms by 2027.

By having the smoke alarms interconnected, when one is activated, they all will activate. This allows those within the home as much time to escape.

In addition to smoke alarms, there are several other steps you can take to ensure the safety of your home and family in case of a fire. These include:

By following these tips and regularly maintaining your smoke alarms, you can greatly reduce the risk of a fire in your home and ensure the safety of you and your family. Remember, the key to fire safety is being prepared and having a plan in place. So make sure to test your smoke alarms regularly and have an evacuation plan in place in case of a fire.