Metal Roofs: How Noisy Are They Really? 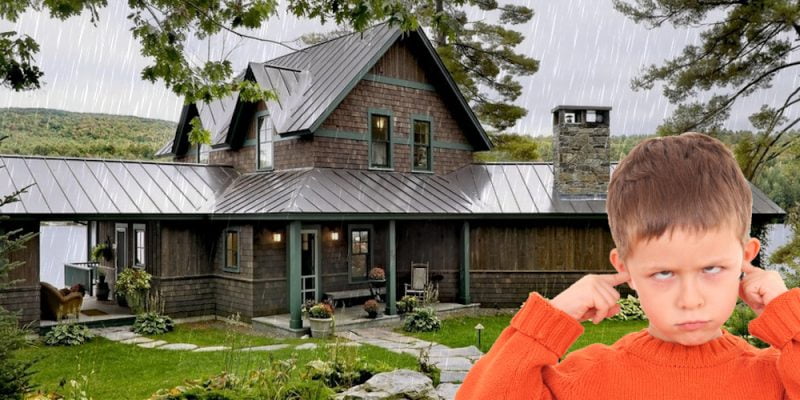 Regardless of if someone has a shingle or metal roof, rain, snow, and other weather conditions will impact it. What many people want to know, though, especially if they are considering the installation of a new roof, is if metal roofs are noisy.

There are a lot of myths about metal roofing. As a result, it is essential to dive into the truth, along with some of the factors that will impact how loud or quiet any roof is.

Why Homeowners Want to Know About Noise Levels for Metal Roofs

Homeowners want to know about the noise levels of metal roofs for several reasons. One is that homeowners are concerned that a metal roof will be very noisy if it starts to rain at night. However, there are other homeowners who are filled with positive memories related to the “pinging” noise of raindrops on their enclosed porch or barn roofs.

The fact is, metal roofing can be either noisy or quiet, just like any other popular roofing material. The first step is to figure out what the preferred option is. For example, if someone likes the sound of rain, going with the noise option is preferred. However, others do not want to feel as though they are living in a huge drum.

The Reputation for Noise

Metal roofs have a reputation for being loud. The metal roofing materials that were installed many generations ago are unique. These were designed with nothing in between the metal panels. The building below is just the wood purlins along with thin air. This meant there was nothing in place to help reduce or deaden the sign of the rain.

Today, though, this is not how metal roofing is installed. For most houses, especially the ones that have an asphalt roof currently, will use OSB or plywood roof decking over the top of the trusses or rafters. Many people want to know if this is enough to stop the noise.

Getting to Know the Most Common Noise Levels

The noise levels that are heard on a roof will be measured in decibels. Zero is considered the quietest sound that most people can hear or detect. Modern safety standards have stated that if someone is regularly exposed to the noise of more than 85 decibels regularly, it can have a serious impact on their hearing. Also, it is important to understand that people are unable to distinguish between sounds that are under five to eight decibels apart.

Helpful Tips for a Quieter Roof

Because most re-roofs are done when there were shingles in place, and sometimes over an existing layer of shingles, the noise is not going to be anything to worry about. If a metal roof is installed over a solid deck or if a quality underlayment is installed (such as double bubble), and if there is an insulated attic present, it is easy to control the noise levels. There are some other tips that can be used to help control roof noise levels, too. In most cases, speaking to a professional roofer will help a homeowner figure out what they can do to make their roof quieter.

As mentioned above, there are some people who want to hear the sound of the rain on a metal roof. If this is the case, a good first step is to just ignore the tips listed above. If possible, install the new roof over an entirely open frame. Do not add insulation or sheeting. Once done, it is time to wait for the rain to move in.

Exploring the Differences Between Metal Roofs and Asphalt Shingle Roofs

Along with knowing what to expect from the sound of metal roofing, it is also a good idea to learn more about the differences between a metal roof vs. an asphalt shingle roof.

Even though the noise difference is just six decibels (as seen above), there are a few other differences that are more noticeable. Some of them can be found here.

Also, when it comes to roofs, the majority of metal roofing products can withstand winds of up to 150 miles per hour -; in some cases more. This is more than enough force to tear asphalt shingles away.

A metal roof is designed to reflect the sun’s heat. This helps to reduce indoor temperatures during the hotter months of the year. Also, asphalt shingle roofs are known for absorbing and retaining heat.

When a metal roof is installed, a homeowner is using recyclable materials. This means it is a smart option for the environment. Most shingle roofs will wind up in a landfill and create even more pollution in the world. The right choice should be clear in this situation.

The Truth About the Noise Levels of Metal Roofing

There are still a lot of mistruths and misunderstandings about metal roofs today. While this is true, the information here should be beneficial in helping to clear some of this up. Be sure to consider all the information above to figure out what type of roofing material to use. In most cases, with the right installation methods, metal roofing is no louder than any other popular type of roofing material. This makes it a viable and sought-after option for many homeowners.