Paper Wasps and What to Do About Them 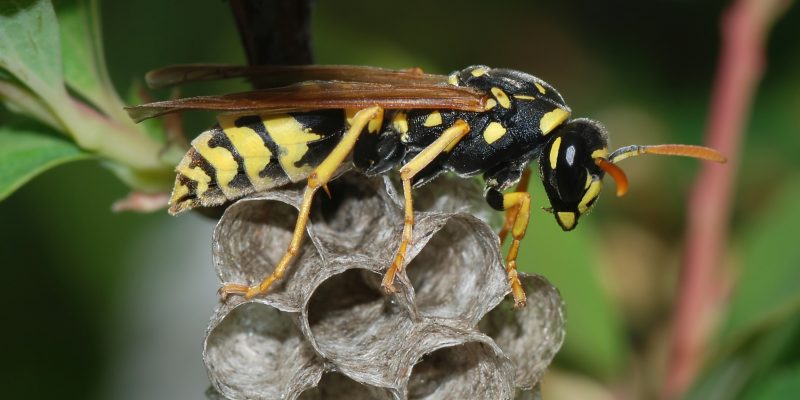 We know for sure, how much paper wasps’ stings hurt. Here are some factors to remember about them, to be prepared in case you encounter one.

You are lucky if you have never experienced a wasp’s sting. However, we should know they aren’t generally dangerous. They only act when they sense any threat to their nests.

Who wouldn’t want to protect their house? Paper wasps are just like that. They sting us if they feel like we are a threat to their nest and queen.

We can usually find paper wasps on trees, garages, indoor plant hangers, chimneys, basically in a sheltered place. So you can tell they want their nests to be protected to the max. Paper wasps are mainly found in North America.

These species of wasps collect fibers from dead plants, then they mix it with their saliva to make the nests. It appears to be made of paper material.

Paper wasps are known as semi-social insects, as they like dwelling in colonies.

Ways you Can Identify a Paper Wasp

There are some common ways you can spot and identify a paper wasp. These wasps have brown and yellow coats, and a few have red markings on them. Identifying them is as easy as house plant identification by leaf shape.

They have 6 legs, which are pretty long. You can easily identify them with that feature, it’s wasp-like. As usual, you will also see antennas on them. They grow about 16 – 20 mm in size.

The Infestation of the Paper Wasps

As we already know the nature of paper wasps that for their habitats they prefer residential spots. The way to detect an infestation is when you see wasps around a particular spot. They usually hover around their nests.

The most effective way to stop a paper wasp infestation is by avoiding to use or keep such objects around that attract these insects. Thus reducing the possibilities of getting stung by these wasps.

The basic steps to take before gardening are to find out if there are any wasp nests around. That will save you from getting stung. Avoid poking or harming their nests, even by accident while trimming plants or picking fruits.

Seal any kind of cracks or openings of your house, to avoid these wasps getting in your house for infestation. These wasps often roam around looking for some sort of nourishment, so it is always wise to cover your food when you’re not around.

If you are spending time outside, try to avoid wearing strong perfumes, the smell attracts insects and especially these wasps. Wear shoes while you’re outside to avoid getting stung if you accidentally step on them if they are at ground level.

Habits Regarding their Habitat

The whole colony dies around winter and only the fertilized queen lives, to grow the next colony, in the upcoming spring season.

When it comes to their habit regarding their nests, they use only one nest throughout the season and it lasts till late fall. Hornets and paper wasps don’t build their nests close to each other, so if you see only one nest around you can be at ease as the colony must be small.

Some people buy fake nests and put them up, to stop the wasps from building their nest.

Benefits of a Paper Wasp

As they are part of nature, they have a purpose and contribution towards nature. Paper wasps are beneficial for our gardens. They are known as the cleaners of nature, as the adult wasps usually catch live or dead bugs to feed their young ones, whereas they feed on nectar.

So when it comes to annoying and unwanted bugs, whether alive or dead, these paper wasps help us to clean up.

How the Stings Feel

Well, it goes without saying, but paper wasp stings can hurt extremely. Most end up in serious allergic reactions. The area you get stung will get swollen and red hot.

The quick and effective measure to take is to wash the wound with soap and cold water. If that doesn’t help to ease the pain, you can use anti-inflammatory medicines, or ointments to reduce pain.

However, for further convenience, you can always visit a doctor. If your pets get stung by these wasps, make sure to take them to the vet as soon as possible.

Habits of a Paper Wasp

The adult wasps feed on nectar while they feed the younger ones with insects such as flies, ants, and caterpillars. During spring the queen wasp looks for a way to get indoors to spend the winter inside and start breeding in spring.

During spring, the wasp starts building the nest, which looks as if it’s made of paper. Eventually, the queen starts laying eggs on the open cells of the nest. Other female wasps usually help in building the nest.

Once the queen dies, another egg-laying wasp becomes the queen and in charge of the wasp colony.

How to Remove the Nest

Try your best to avoid destroying the nest. Firstly because they are not harmful if left undisturbed, so for the sake of nature and their lives, let them be. Secondly, if you try to destroy it by yourself, you might get stung badly.

They have a process known as “attack pheromone”, where they attack in groups, this could be extremely fatal.

Remember all the wasps will die by winter except the queen wasp. So wait till the winter to get the nest out as there will only be the queen wasp left and eventually she will abandon the nest.

If that doesn’t work out, and you want the nest to be taken down as soon as possible, it will be better to take the help of a professional.

An Idea on Paper Wasps

Now that we know about paper wasps in detail, we know they are beneficial for our nature. So it’s better to keep them as they are with their nests.

If they are not disturbed they wouldn’t harm you in any way. They only attack, when they sense danger.

The more we get to know about our surroundings and nature, the more beneficial it is for us.