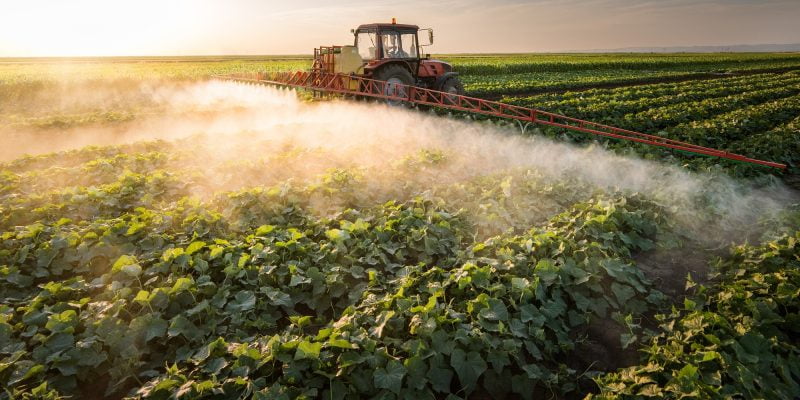 Fungicides, herbicides, and insecticides are all different classifications of pesticides, killing and/or deterring unwanted fungi, bacteria, plants, insects, and bugs in a garden, farm, or lawn. Although these different types of pesticides are very effective in keeping pests away from plants, flowers, and other crops, many of them pose some very dangerous threats to humans. If you use any type of pesticide, here’s what you need to be aware of.

Fungicides prevent the growth of fungi and other microorganisms on plants, trees, and crops. Some may be sprayed into the soil to kill/prevent fungi, while others may be sprayed directly onto the plant. Because fungicides are chemical formulations, they can cause minor skin, eye, and throat irritation to the people that use them, and they can potentially cause neurological damage after prolonged use.

One alternative to fungicides is to create an Aerogarden, which uses nutrient-rich water in the place of soil. Eliminating the soil eliminates the fungi and bacteria that can be found in soil, therefore eliminating the need for a fungicide. You can also create your own fungicide from natural sources, such as water-diluted milk. Up to 90% of mold and mildew found in soil can be eliminated by regularly applying diluted milk directly into the soil.

Exposure to these dangerous herbicides can be as simple as breathing it in when using, to more extreme such as actually ingesting it when eating, drinking, or smoking after using the herbicide. Glyphosate usage has been linked to Non-Hodgkin’s Lymphoma while paraquat has been linked to Parkinson’s Disease, and victims who suffer from these and have used either herbicide are encouraged to reach out to a lawyer.

If your weed killers contain glyphosate or paraquat, switch to one of these natural alternatives instead:

Not only are insecticides used to keep bugs away from crops, but they’re also used to kill disease-carrying insects. Fortunately, most pesticides are only dangerous when they’re actually ingested. However, the most commonly used insecticides are known as organophosphates, and they can enter the body through ingestion, inhalation, or when they come into contact with the skin. Once this happens, they can affect the nervous system, as well as the respiratory system, making it difficult to breathe.

Like fungicides and herbicides, there are natural alternatives to insecticides as well. As mentioned above, neem oil is a great insecticide, and it is actually used in a variety of store-bought pesticides. Other natural insecticides include:

If you’re a farmer, gardener, or if you engage in any type of lawn care that requires you to use fungicides, herbicides, and/or insecticides, it’s worth it to take a look at the pesticides you use and make sure that they’re not harmful to your health. Although harmful pesticides are banned in the European Union (EU), not all of the same pesticides are banned in the United States. Some states have banned the use of paraquat in agriculture, but it’s still legal in several other states (and countries). Because of this, it’s important to take the necessary steps to protect yourself against the dangers of chemical-based pesticides.

Not only are chemical-based pesticides dangerous to those who use them, but they’re also dangerous to any children and pets that may come in contact with them, and they’re also harmful to the environment. Switching to natural pesticides is better both ecologically and for the health of you and your family.