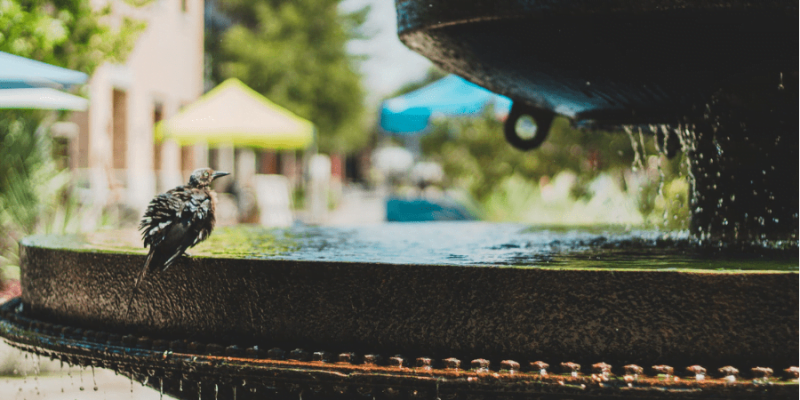 There is a simple beauty in a green backyard full of a few trees and plants. Sitting and enjoying the sun on the weekend, reading a book in the afternoon, or watching the kids play in the garden (if there are any) is always a pleasant feeling.

Close to nature, it brings people, especially those living in the most urban parts of the city. Talking about all this, most people must have seen a birdbath, be it in a public garden or at a friend’s home.

Having birds chirp on the trees is another thing, but having them quench their thirst in front of your eyes and sort of play around here and there throughout the day makes the whole garden experience far better.

If not that, then just the look of it gives everything a more beautiful vibe. The best part is that anyone can have it as an addition to their gardens, make it on their own or buy one from the market.

From cheap ones to expensive and grand birdbaths, all are available in the market. Here is a small list of 22 bird bath ideas to try out:

Bird Bath Ideas for Any Yard 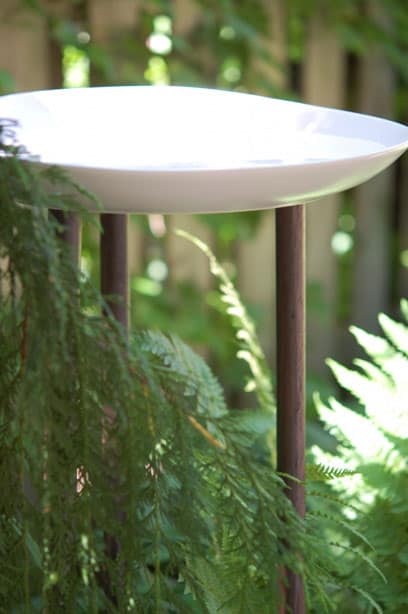 This one is quite simple and easy to make. As the name suggests, all it needs is a candle plate that most people have at their homes. It can be bought cheaply in a mall or some other shop selling plates and gift items. 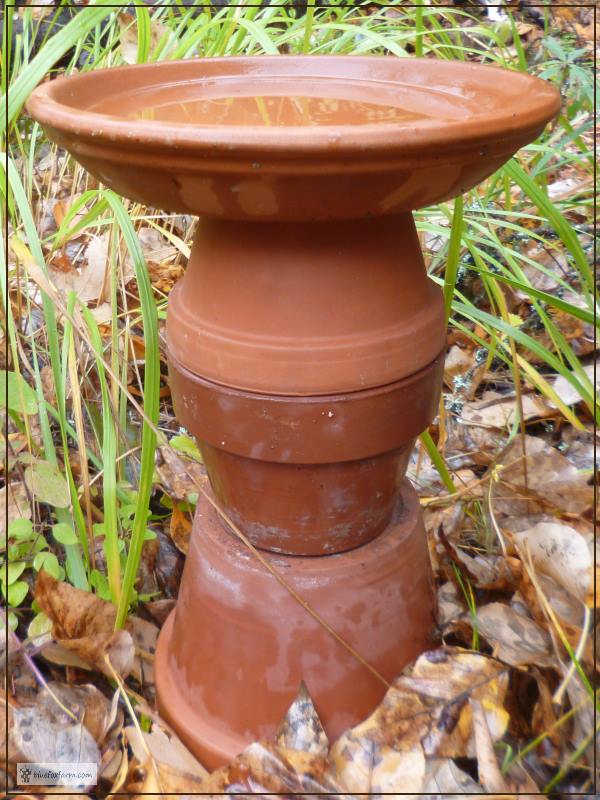 Terracotta earthenware can make a lovely birdbath. First, it is terracotta, so it does not harm the soil and all, even if it breaks. Then, it is cheaper yet versatile.

It can be painted, stacked one upon the other, or order a specific design for the garden, as shown in the image.

They can even be used along with the candle plate by keeping a candle plate on top of a terracotta pot. There is just no end to the creativity that can be put into work here.

The design shown in the image for reference is called barnyard. 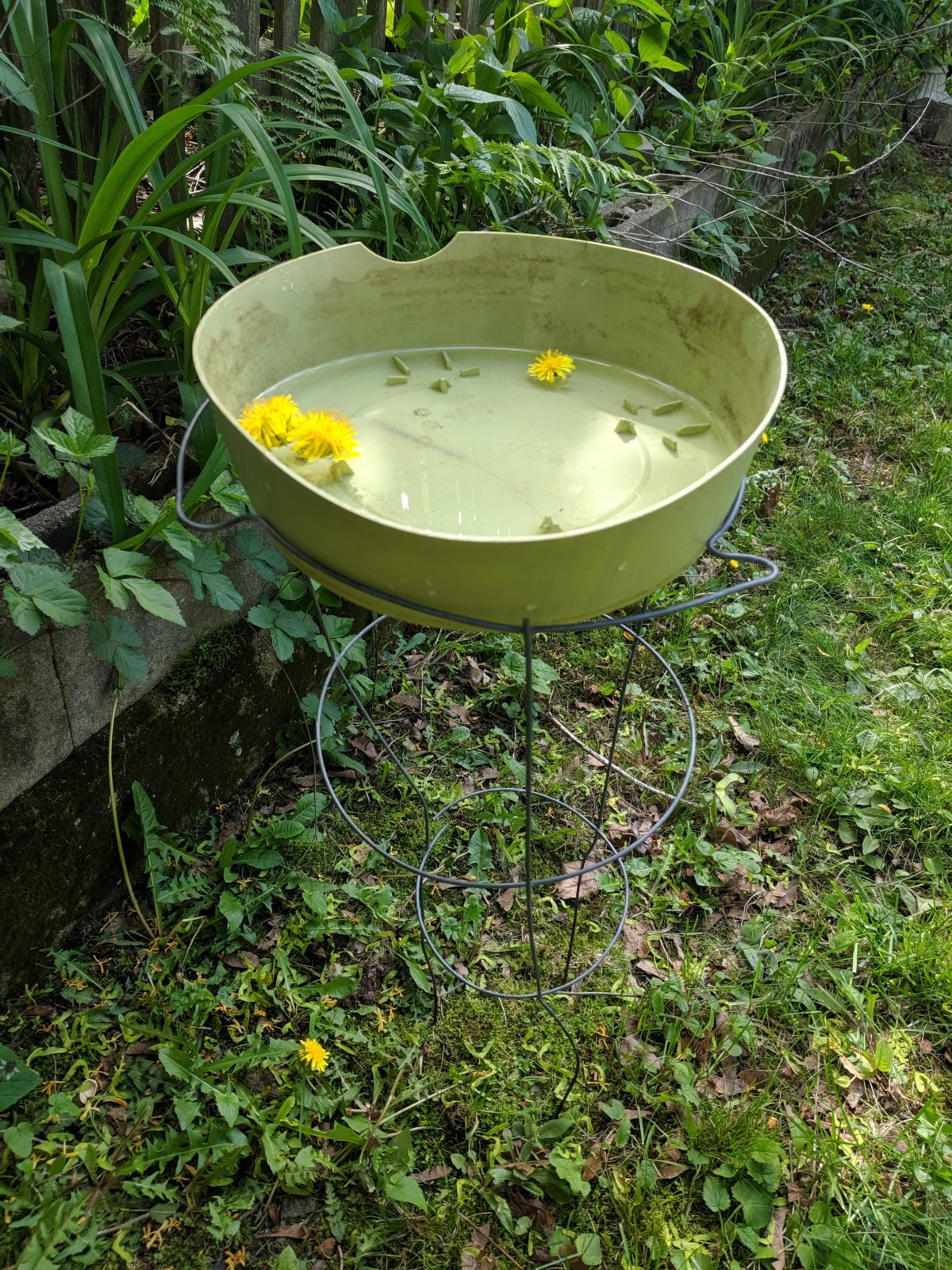 This one is for those who have a short budget and still want to add that Birdbath to their garden.

A Tomato-Cage can be bought cheaply from the market. Although its primary use is to help the tomato plants take to support and grow better, it can be used as a support to put a saucer on top of it.

add some water to it and done. To make things even better, one can plant some real tomatoes or creepers near it or below it.

For all those who have an old chair, metal or wooden, lying around in their garage or basement, it is time to get them out in the open.

Recycling is a great way to help not just mother earth but also one’s pocket by saving some money. That is why using an old chair to make a birdbath is not something out of the world, although it can be out-of-the-box thinking.

As shown in the image, a plant saucer can be easily added to its center for round chairs. For other chairs, some breaking and adjustments will be required before putting the saucer in it. The extra space, if any, can be used to put another small bowl of seeds or rice for the birds. 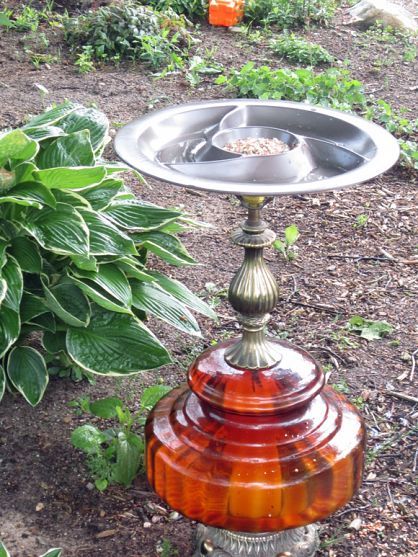 This DIY Birdbath is fun and cheap to make, looks creatively fancy and straightforward, and is functional.

Instead of throwing those chip plates that one gets with some Chinese or Mexican food or nachos.

They can be bought for a low price from a mart as well. Although it can be kept just like the candle plate, using a metal rod or a PVC pipe to hold it erect will make things even better. 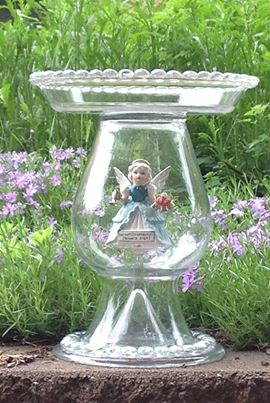 This one makes use of any small figurine, like an angel, in this case, some things like a plate, an old transparent glass lamp, and some patience to sit with them to create a beautiful birdbath. 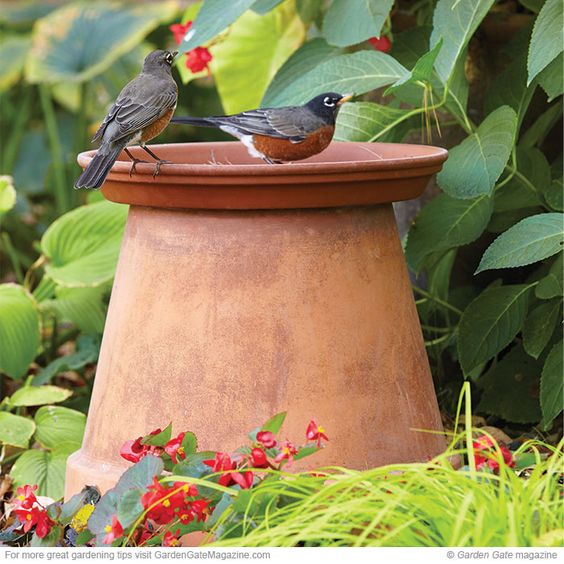 The simplest and easiest one to make. This one requires old pots and clay saucers or an old clay pot for plants and its tray. Flip the pot upside down, place the saucer on top of it, fill it up, and the Birdbath is as ready as it can ever be. 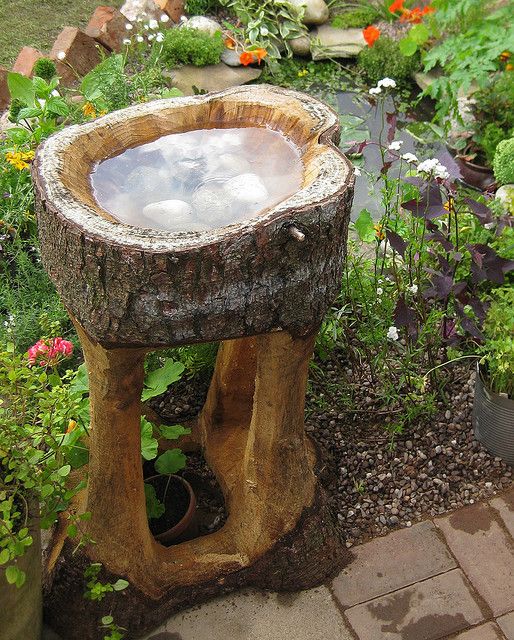 This one requires some skills– to work with wooden logs and the tools for that. It looks beautiful, close to nature, and will make the garden look just fabulous.

It can be done by someone who works with wood, or a carpenter for that matter, and since it only requires some primary job to be done with the wood, it should not cost a lot.

Just as the name suggests, this one is a hanging Birdbath. There are some cheap ones available over the internet to buy, or even in the market.

However, if one wants to make them, they are just as easy to make. All one needs is an old lampshade or a plastic saucer or something of the sort to put water in and not break when attaching chains. Attach the chains and hang them anywhere it pleases the eyes. 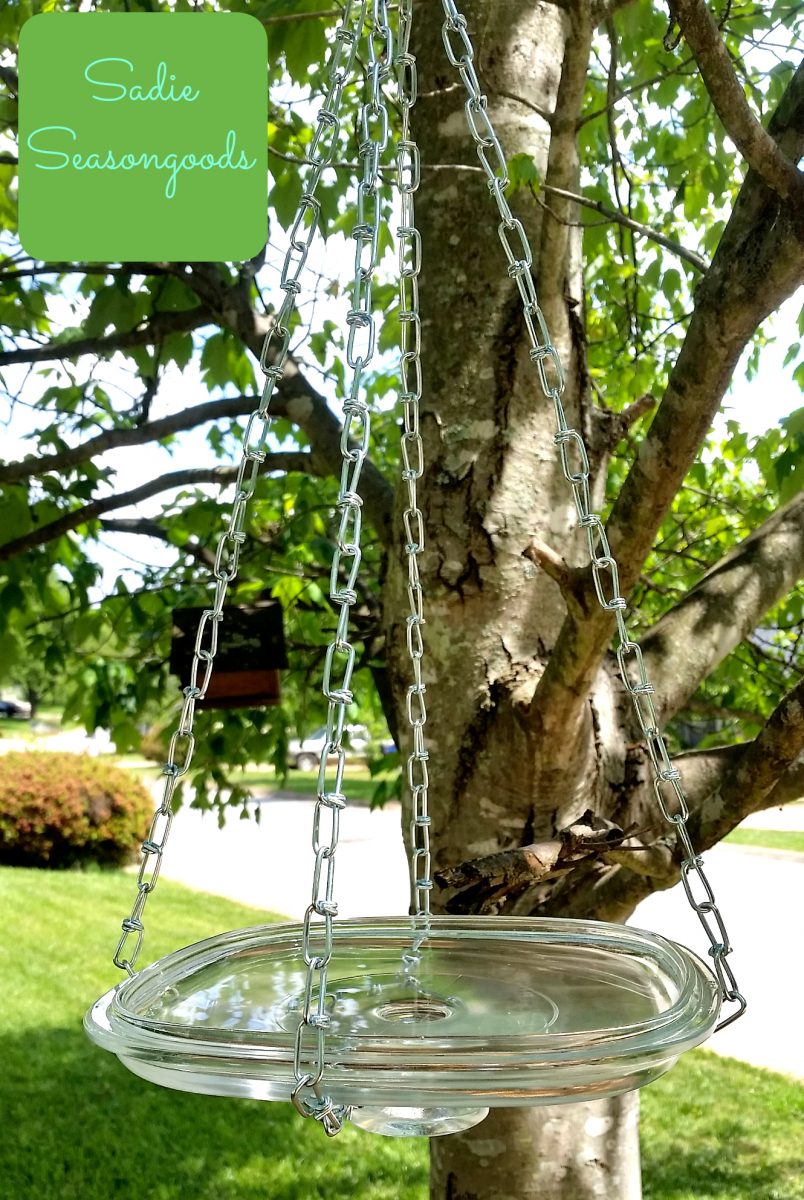 It is a variation of the hanging Birdbath that uses a Glass-Lid instead of a saucer or lampshade. 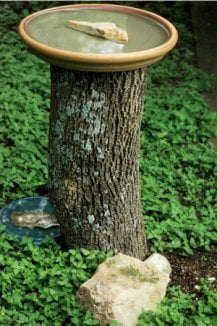 A birdbath made using a tree stump in the garden or somewhere near, or in short, a Stump-bath. Instead of hiring someone to get rid of that old stump or doing the job, the stump can be used as a platform to place a bowl, a saucer, or anything to create a birdbath.

If not, if the stump is wide enough, the top can be made into a birdbath by digging up the top a little in a crater-like shape. 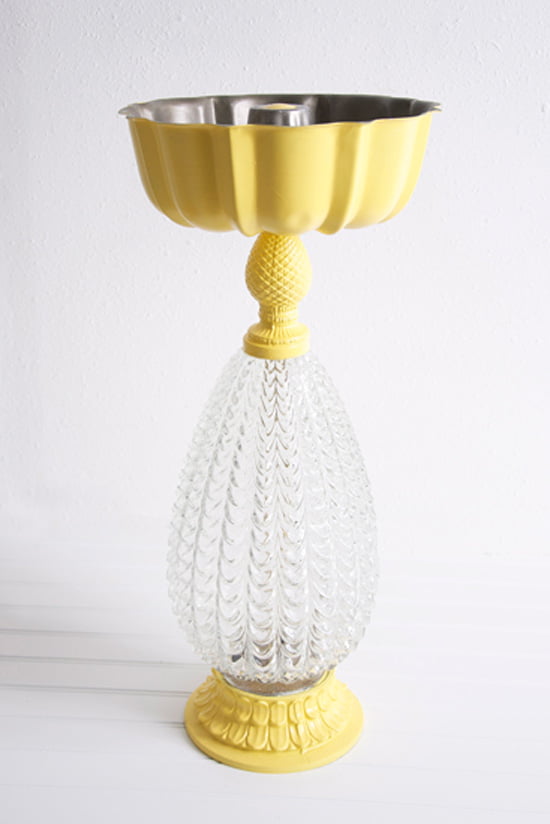 The one shown in the image is quite beautiful. However, it does not mean that it must be like this only. Any lamp that can hold ‘a saucer-like thing’ or ‘anything that can hold some water on top of it can be used to make this DIY Birdbath.

This one can and should be bought only. Making these things at home can be a little tricky and harmful for the birds if anything turns out to be faulty.

These are good for places where it is cold most of the year or for winters. The birds will be happy to get some warm water now and then. 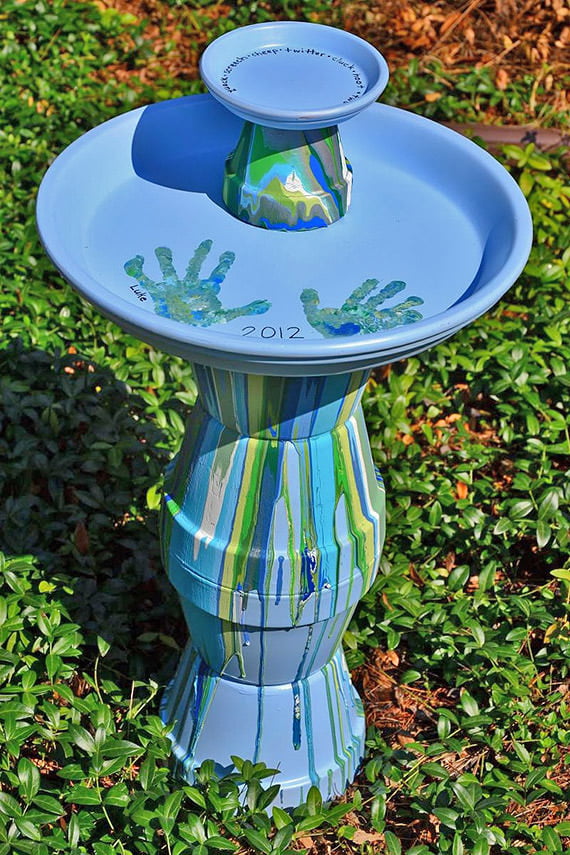 It is an elegant variation of the terracotta Birdbath. The colors used on it are elegant and neat. The handprint makes it look simply beautiful.

The name gives away what it is. Use a flowerpot with some plants and add a smaller one in between, which will hold water. The center pot should not be too deep. If it is, then use a saucer instead. 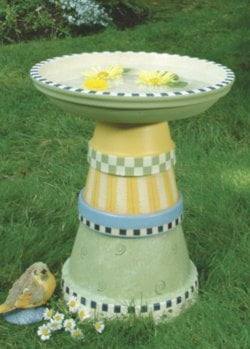 Just like the handprint design, this one uses a checked design for the surface.

17. A Mosaic Bath for Birds 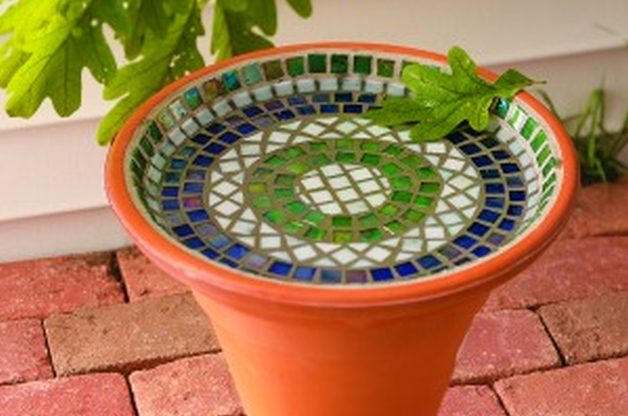 This is not simple to make, but if someone is interested in these kinds of artistic designs, this one is a good idea to try around. 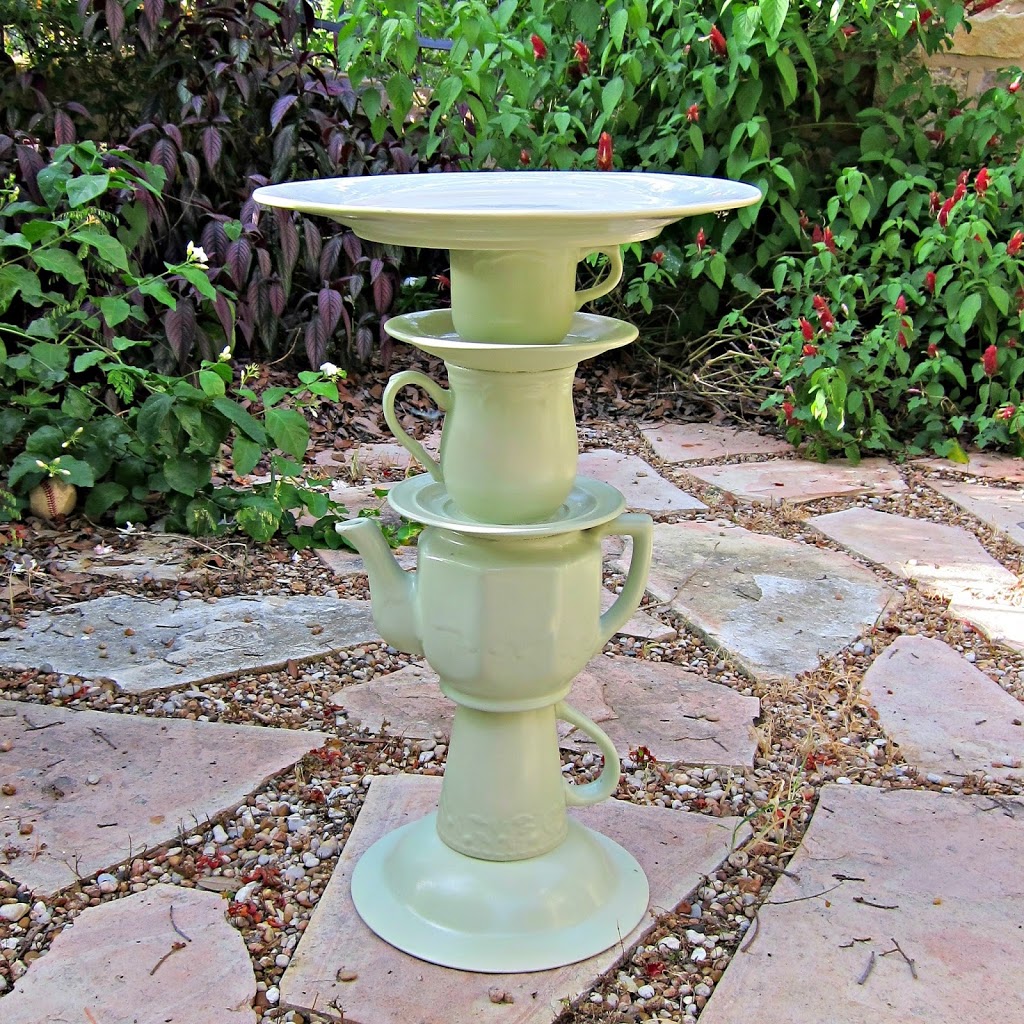 This one is a personal favorite, being a tea-lover. It looks fancy, simple in construction, and cheap if using old teapots or cheap ones bought from some store. It also looks unique so that any visitor will give it more than a single look. 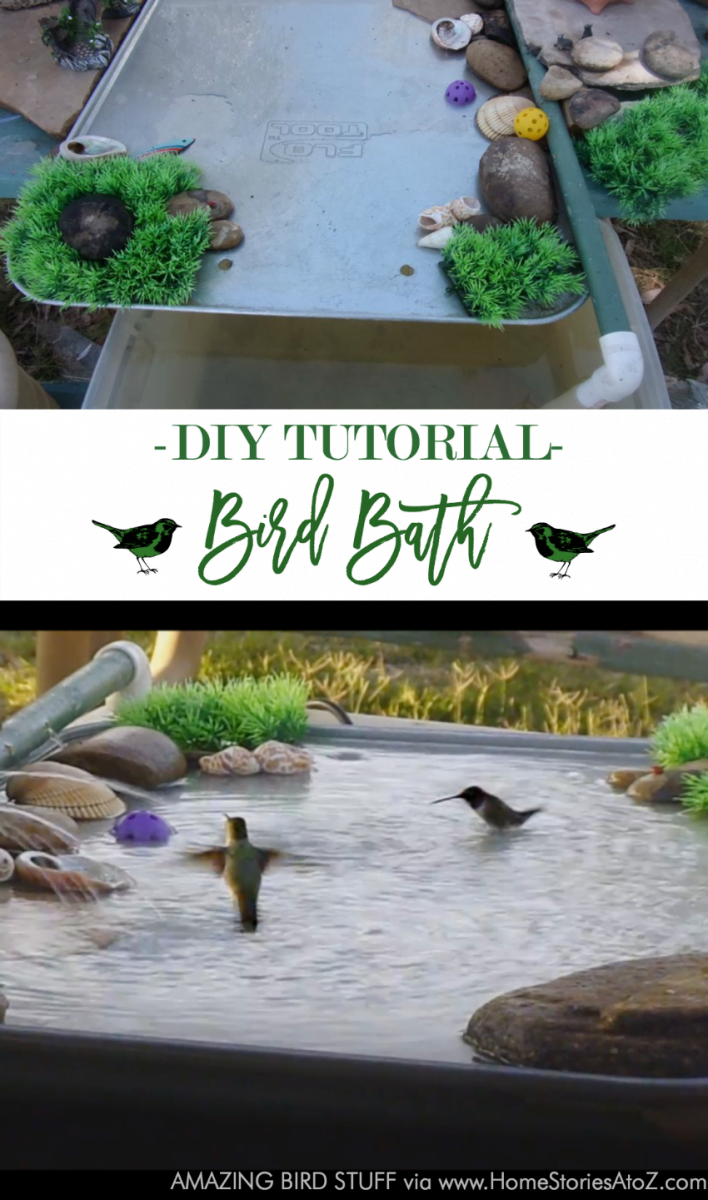 For this, any pan with broad enough sides to keep the water inside, like an oil pan, can be used. Adding things like some stones, pebbles, small pots with plants, and such will make it look amazing. 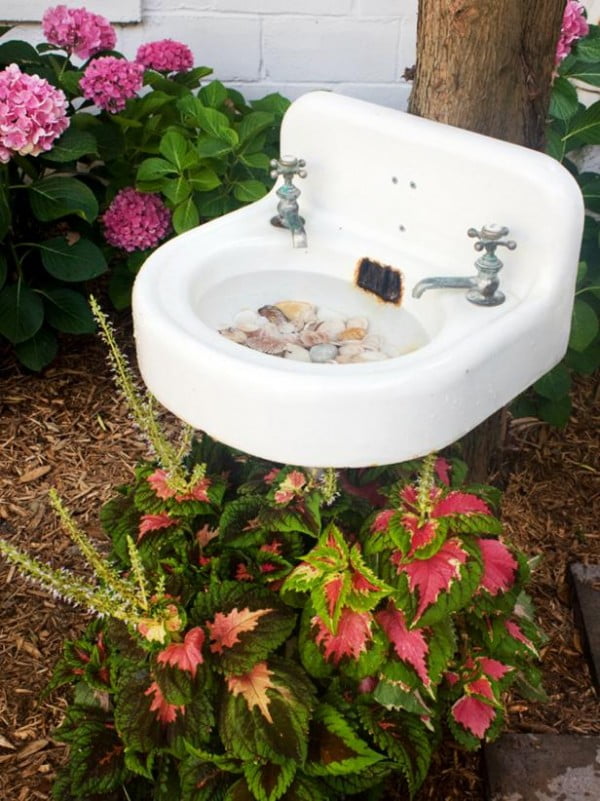 This one will be cheap for those who already have an old Hand Basin somewhere in their home. Those who do not can get a second-hand one from many places. Clean it up, put some pebbles in it, and the Birdbath is as good to go as it can be.

Made up of a serving bowl, this one can be placed on top of a metal rod or any similar surface, or even a tomato cage. It costs less and works well.

Take a giant leaf, cover it with concrete, or get it covered by someone working with concrete nearby. If not, then small concrete DIY mixtures or even plaster mixtures for crafts purposes are available for this.

6 Worms that Live in Your Potted Plants: What Are Those?